In my continuously failing efforts to tidy up my study, I came across a programme for a Royal Shakespeare Company production of Julius Caesar at Stratford upon Avon in 1992 (below). 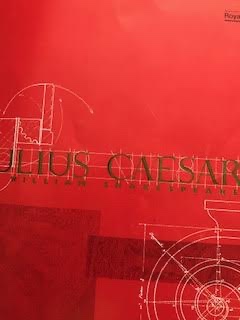 I'd forgotten that the RSC had asked me to write a thousand-word article for it, in exchange for which they gave me two free seats at an actual performance.

Reading it all these years later, it struck me as better than I expected - and at least good enough to put on my blog.

… so little has the language of persuasion changed in the last four hundred years that, were Shakespeare to return today, he would have no trouble in marketing his services to contemporary politicians …

When it comes to writing speeches to “stir men’s blood”, Shakespeare exhibits a mastery equal to that found in the classical Roman times about which he was writing. For someone living in an era when education was more or less synonymous with learning the classics, it was hardly surprising that he had a good understanding of rhetoric. Perhaps less obvious is the fact that the rhetorical techniques used by Mark Antony are much the same as those used by today’s politicians in their attempts to win our hearts and minds and votes.

Recent research, based on analyses of video-recorded political speeches has examined sequences where audiences applaud something said by a speaker. This makes it possible to identify forms of language and modes of delivery that literally “move” audiences to applaud what the speaker just said with a physical and audible display of approval.

One of the main findings is that about 75% of the bursts of applause during political speeches occurs after the use of seven rhetorical devices, most of which feature prominently in the Forum speech. For example, rhetorical questions come thick and fast. Even before his first one, Mark Antony opens with one

there might be a case for giving praise where praise was due.

An equally dramatic difference in tone would have resulted had the second contrast had b of the simplest rhetorical devices, a list containing three items: “Friends, Romans, Countrymen”. Famous examples from later centuries include political slogans like “Liberté, egalité, fraternité” and “Ein Volk, ein Reich, ein Führer”

A more important device involves the use of various forms of contrast, such as Margaret Thatcher’s “You turn if you want to – the lady’s not for turning” and John F Kennedy’s “Ask not what your country can do for you – ask what you can do for your country.” Mark Antony launches into his speech with two consecutive contrasts: “I come to bury Caesar, not to praise him” and “The evil that men do lives after them. The good is oft interred with their bones.”

This early use of powerfully formulated lines highlights the importance of both of striking an immediate chord with an audience and of establishing the mood and agenda of what’s to come. His opening is well crafted on each of these fronts and the structures reveal a recognition of the importance of details like the order in which the two parts of a contrast should be delivered. It is usually the second part with which the audience will wish to affiliate or will highlight a theme for further development – and this is exactly what happens here.

Think of the very different expectations that would have been established if Shakespeare had inverted the contrasts. Had the first one been “I come not to praise Caesar but to bury him” it would have implied that the speaker was glad to see the back of him and was about to tell us why, rather than hinting that een inverted too: “The good men do is oft interred with their bones; the evil that men do lives after them” would have suggested that we can forget about anything good Caesar might have done and that what matters now is to clear up the mess caused by his evil deeds.

Shakespeare therefore constructed the sequence in just the right order for the mood and direction the speech was to take. The way it develops then shows that contrasts are not only useful for organising material on a line-by-line basis but can also provide a single unifying theme for the overall structure of a speech. This is illustrated by the recurring contrast between Mark Antony’s view of Caesar and that of Brutus, summed up in the lines “I speak not to disprove that Brutus spoke, But here I am to speak what I do know.” It also provides the continuing leitmotif with his repeated references to what Brutus has said about Caesar.

As one would expect from an accomplished speechwriter, Shakespeare’s ability to combine different rhetorical devices would have assured much prime-time news coverage for a speaker using one of his scripts:

“to wrong the dead, to wrong myself and you,

“than I will wrong such honourable men”

is an example of a contrast in which the first part involves a list of three. “you are not wood, you are not stones, but men” has a third item that contrasts with the first two in the list.

When it comes to content, research has shown that the surest way to stir an audience is either to attack your opponents or to praise your own side. On the evidence of the Forum speech, this too is something Shakespeare understood, a Mark Antony heaps increasingly praise on Caesar while using ironic praise of Brutus and his colleagues in an implicit and thinly veiled attack on the opposition.

Another point to emerge from research into contemporary speeches is that combining more than one rhetorical device in a single sequence often produces a more enthusiastic response than the use of a single device on its own. When that happens, such lines are very likely to attract the attention of journalists, who may select them as sound-bites for television news programmes.

When Mark Antony becomes self-deprecating about his own skill as an orator, we hear a contradiction that would have sounded amusing to those of Shakespeare’s contemporaries who were as well-versed in rhetoric:

“I am no orator as Brutus is;

“But as you know me all, a plain blunt man…

“For I have neither wit, nor words, nor worth.

“Action nor utterance nor the power of speech

With a contrast, alliteration and two lists of three, he uses powerful rhetorical forms to deny his own rhetorical ability!

As a speechwriter, then, Shakespeare was a master of his craft. Indeed, so little has the language of persuasion changed over the past four hundred years that, were he to return today, he would certainly have no trouble in marketing his services to contemporary politicians.

Less certain is which of our current political parties would he help.

Max Atkinson is author of Our Masters' Voices: the language and body language of politics, Methuen, 1984.