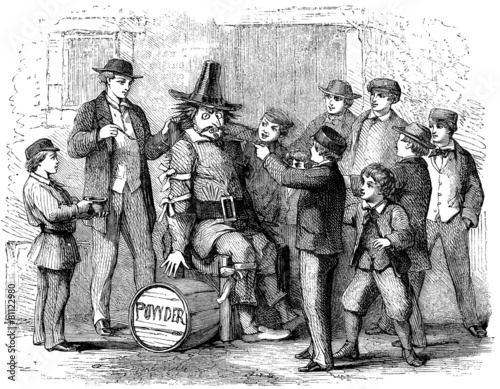 Growing up in Yorkshire meant that there was a lot happening before snd during bonfire night.
Apart from the fact that Fawkes and some of the other plotters were old boys of my old school (St Peter's School, York), all Yorkshire children knew that the night before the 5th  of November was when Guy was sitting on barrels of gunpowder underneath parliament.  So the evening of 4th November was time for some childish and sometimes dangerous fun, like putting lighted fireworks through people's letterboxes.

More  childish but easy enough in the days when phone-boxes were everywhere and calls only cost a few old pence to make was to phone people up whom you'd never met. For example if you knew that "Smellie" was a real surname, you could find plenty of targets in a phone directory. Friends could then cram into a phone-box and dial a carefully selected number. When someone answered, the dialogue would go more like this:
Answerer: "Hello.'
Caller: "Are you Smellie?"
Answerer: "Yes, who are you and what do you want?"
Caller: "Just phoning to say we think it's time you had a bath."  CHILD PUTS DOWN PHONE
All in phone-box: Loud laughing and giggling.
_______________________________________________
Mischief-night on 4th November was a tradition throughout the North of England. But, on going down  South 200 miles to Reading University, I was surprised to learn that most of the other students had never heard of it.
Was this because people didn't do that kind of thing in southern England or because young adults wouldn't admit to such daft behaviour?
My research suggests it was a real North-South difference, but a remaining question is whether the American obsession with Halloween has become so entrenched here that 4th and 5th November have become much less significant than they once were?
at November 04, 2021

We certainly have imported the American obsession with "trick or treat" at Halloween, but they imported it from the predominantly Scottish & Irish tradition of guising. Guising and mischief night appear to be fairly closely related traditions.

Re telephoning Mr Smellie and others from a public phone box, You, Ken Foster and I phoned his dad and he picked up the phone with "Pontefract police station." We ran a mile